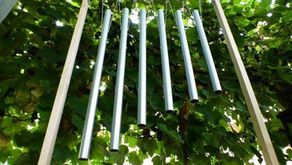 During this meditation you'll receive these vibrations through the harmonic & soothing sounds of tuning pipes. Resembling large wind chimes, the size and design of the pipes send out their resonance in expansive circles like a stone tossed into a lake, allowing their gentle vibrations to "wash" over you, while inducing feelings of peace and tranquility.  Additionally, we'll introduce you to the frequencies of Shekinah; the female aspect of God, and Genesis; creation and restoration.